Why Do I Not Rank on Google? 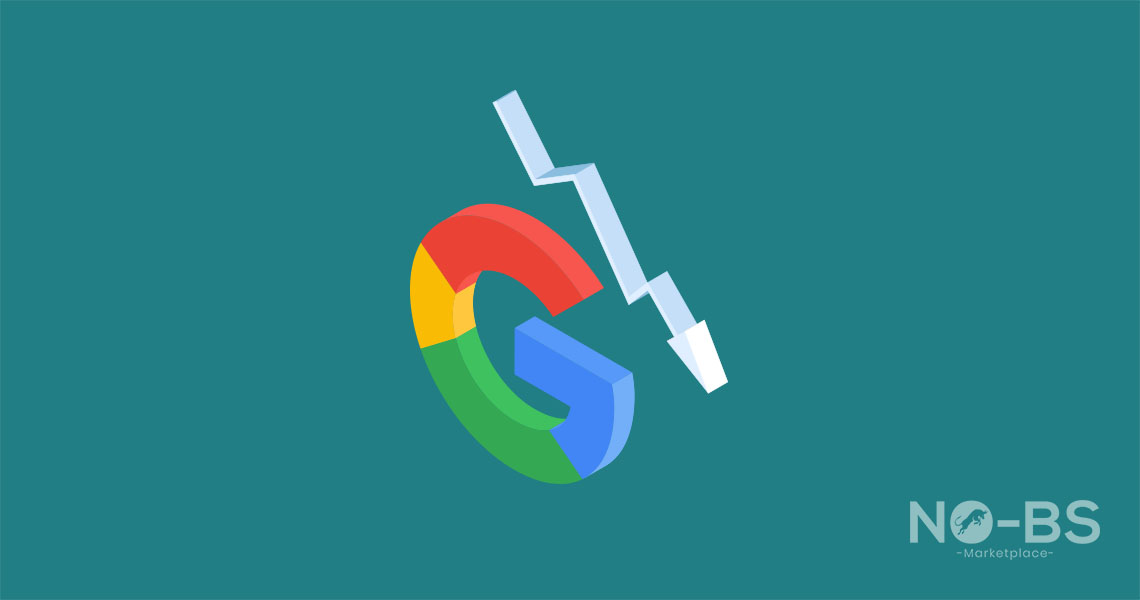 It’s human nature to want to be number one at something. Whether in a poker game with friends or a marathon against hundreds, people won’t settle for anything less than first place. We don’t have time to get down into the weeds behind the psychology of human competitiveness, but it’s an inevitable reality.

It’s easier said than done, especially in search engine optimisation (SEO). Your site is up against nearly two billion websites on the internet. Even if we assume that only 15% of those sites are active (according to some sources), that’s still roughly 300 million websites as potential competitors. Ranking first and keeping it that way for a long time is quite the feat. 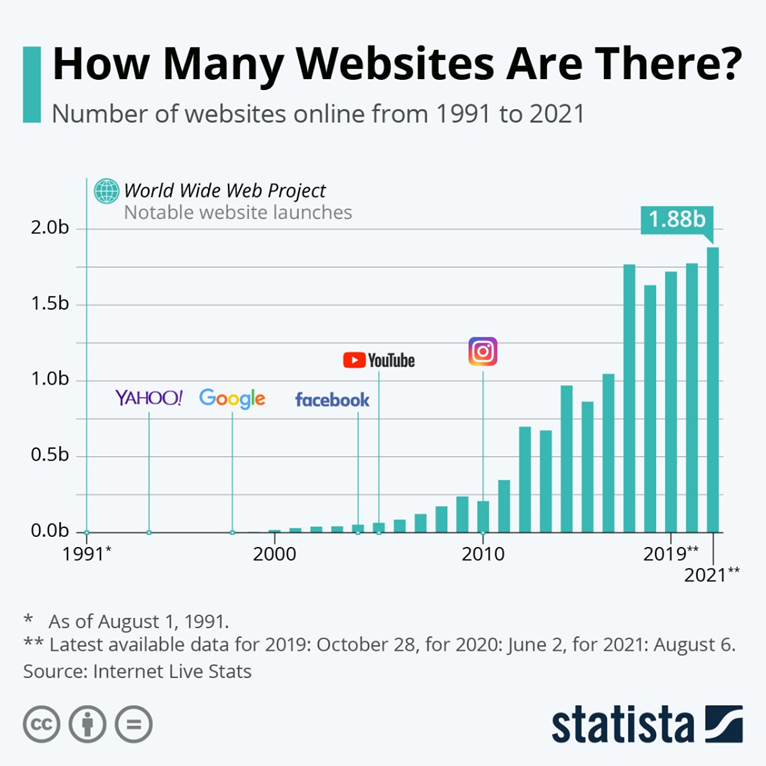 Of course, that won’t stop anyone. Ranking on Google has become a priority for businesses, much so after the pandemic. Consumers are more reliant on e-commerce for their wants and needs, and brands need to get out there more. At least, they have to appear on specific search queries; ranking first may come as a welcome bonus.

If they don’t see themselves on Google, it may be a sign that something’s wrong. Before that, let’s define what it means to not rank on the world’s largest search engine.

What ‘not ranking’ means

To say you aren’t ranking on Google carries one of two connotations. First is literal, as in you’re not ranking because your business doesn’t have a website or a social media page. If Google’s web crawlers have nothing to crawl on, they can’t include you in the results.

There aren’t many situations where a business doesn’t need a website. A social media page alone might not even be enough because of limitations. On the other hand, a website gives you total control, makes your business look more professional, and enables online selling, among other benefits.

That brings us to the second idea; even if you do have a website, it might be buried way back at the search engine results page (SERPs). We aren’t just talking about page 100 or 1,000 rankings but also pages two through ten—places few users ever consider looking.

Below is an estimation of the click-through rate (CTR) of the first 10 search results. The CTR refers to how many clicks a specific ad receives relative to the number of impressions or times people saw the ad. Unsurprisingly, the first result gets over a quarter of the clicks. The first three results receive more clicks than the remaining seven combined. 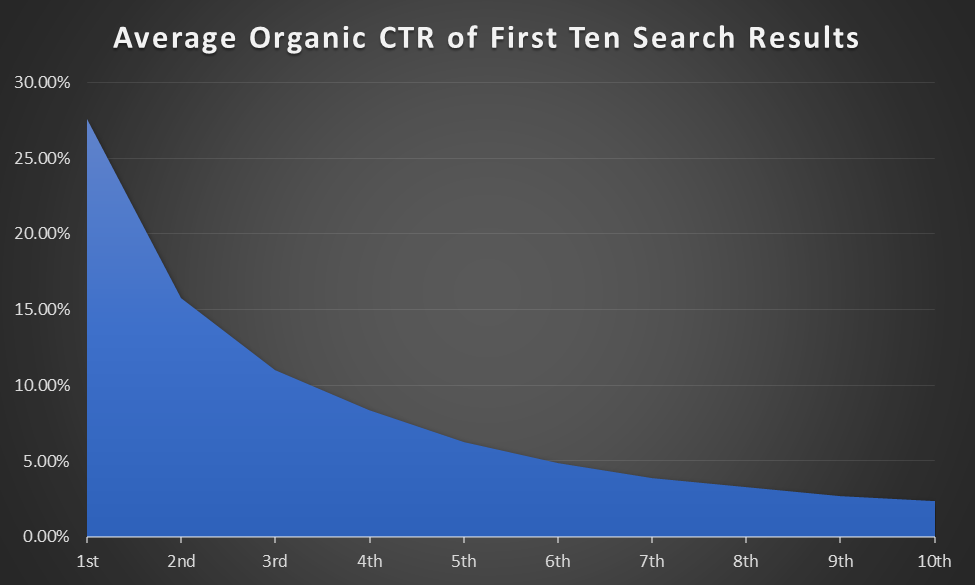 As you can also see, after the first result, it all goes downhill. By the second page, the chances of any search result getting a click are less than 1%. Past the 20th rank, a site may as well not exist.
Why do the first three results warrant so much attention? Users want to find what they want or need right away, and they often do so among those results. It’s all a matter of how relevant the result is to their query. If you’re searching for ‘NO-BS Marketplace,’ the first result shouldn’t be anything but NO-BS Marketplace.

Reasons for not ranking

Since the first connotation of not ranking on Google can be resolved by having a website, we’ll assume that your website is buried beneath competitors. SERPs can be a brutal place, especially for days or months-old websites. If your site has been around for some time now, the reasons may be one or some of these.

You wouldn’t want to mess with Google in this day and age. After countless updates throughout its life and counting, its algorithm has become highly advanced. Whether the backlinks come from unnatural sources or the content adds little to no value, Google will find out. 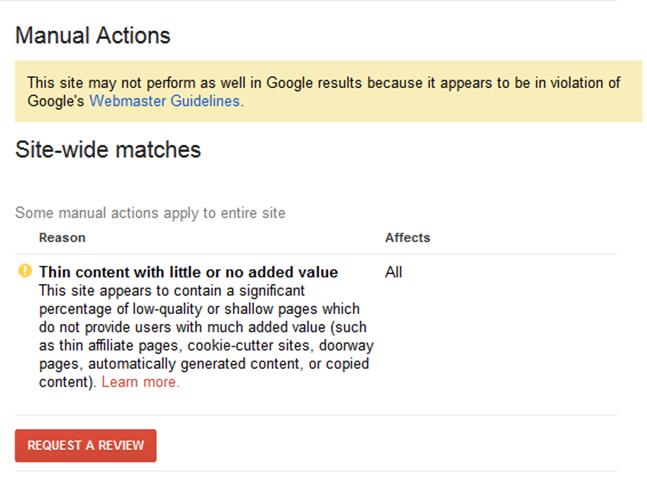 When it does, one of two things can happen. The less grave of the two, though still pretty severe, is a ranking drop. As we’ve already established, ranking anywhere past 20th is a good way to not rank on search results. You’ll notice it through the drastic drop in organic traffic one day. 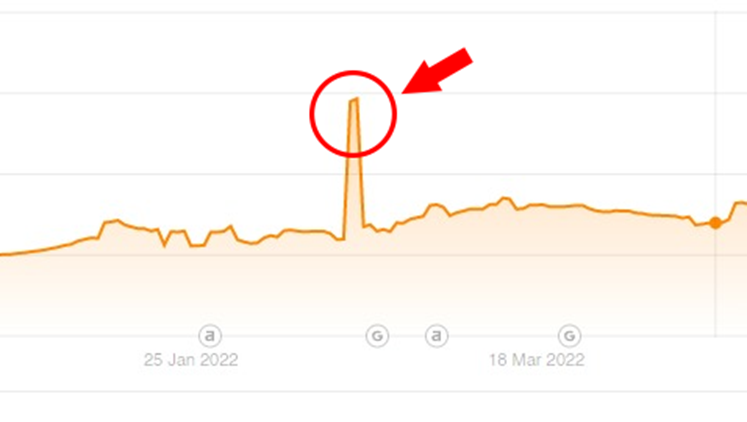 If you can’t find your site or page, then Google may have deindexed it. This means the site or page has been removed from search results, unable to gain exposure. The following offences might result in a deindexing penalty:

It’s important to keep up with Google’s guidelines to avoid penalties.

Any business owners know that customers don’t like waiting or being made to wait. The same goes for waiting for the site or page to load completely. Conversion is at stake when you make people wait to access the site, and the conversion rate drops every second of waiting.
More importantly, the bad experience visitors get after accessing the site is essential data for Google. ‘Bouncing’ visitors or those who visit the site but don’t explore it further can imply poor optimisation. Slow-loading sites will lose to fast-loading ones, plain and simple.
You can check your website’s loading speed through online tools like Google’s PageSpeed Insights. Enter the URL, and it’ll generate a detailed report of the site’s loading speed. The following are the results for NO-BS Marketplace’s desktop website. 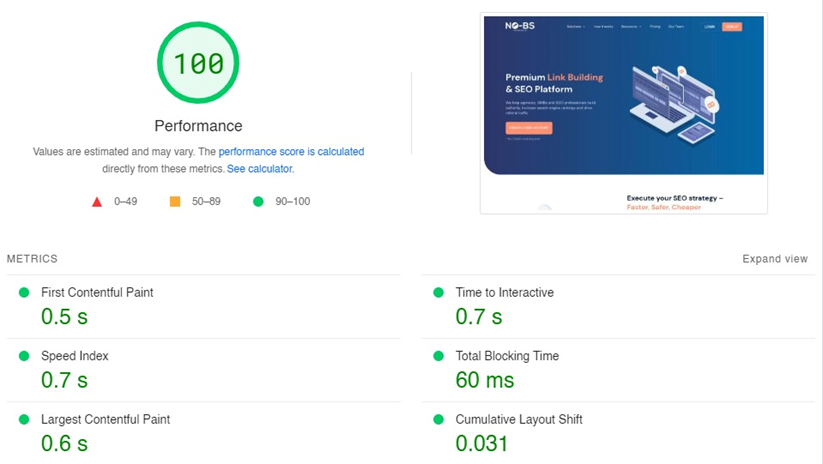 Here are the results for NO-BS Marketplace’s mobile website. 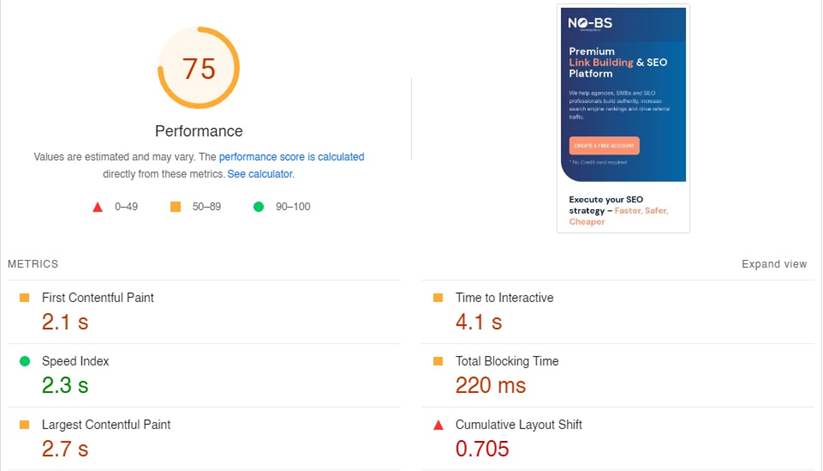 Google has a few tips to help improve a website’s loading speed.

These are just some ways you can help improve your website speed.

Aside from a website’s slow loading speed, a major issue that drives customers away is the lack of a responsive design. Since mobile internet traffic has almost doubled since 2015, responsive web design is no longer an option but a must.

Below is an example of a web design that isn’t optimised for mobile. And before you judge, the designer deliberately made it so to make a point. 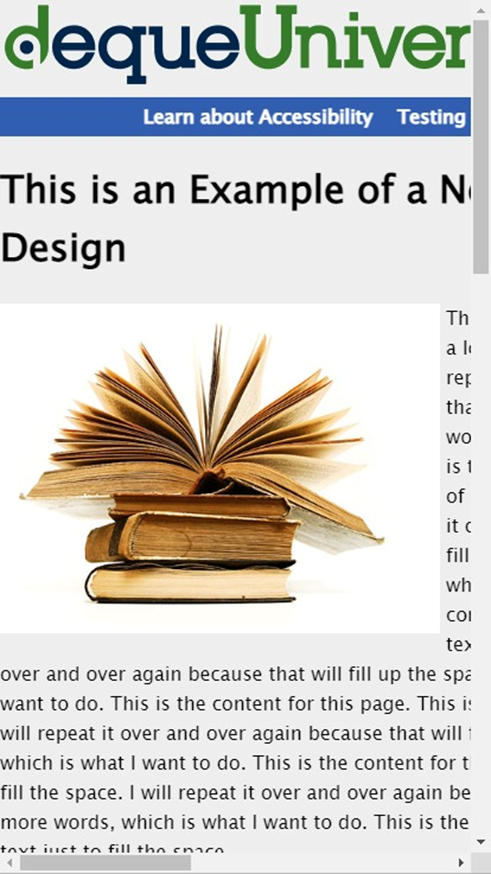 This is how a non-optimised page appears on the screen of an iPhone 6S Plus or 7 Plus. A mobile user will find reading the content a chore because they have to scroll up, down, and sideways. As a result, they have to be interrupted from reading the entire thing several times, making for a bad overall user experience.

Google understands that mobile is the future of web browsing, which is why mobile optimisation is a ranking factor. If your website doesn’t have one, you’ll miss out on reaping the benefits of a mobile-based consumer market.

Many online tools let you check if your website’s optimised for mobile, like Website Responsive Testing Tool. Simply enter the URL and set the type of device and resolution you want the site to appear in. See how the NO-BS Marketplace website seamlessly shifts from desktop to mobile. 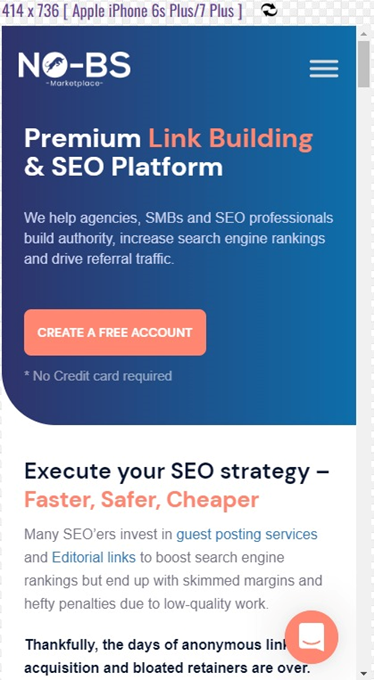 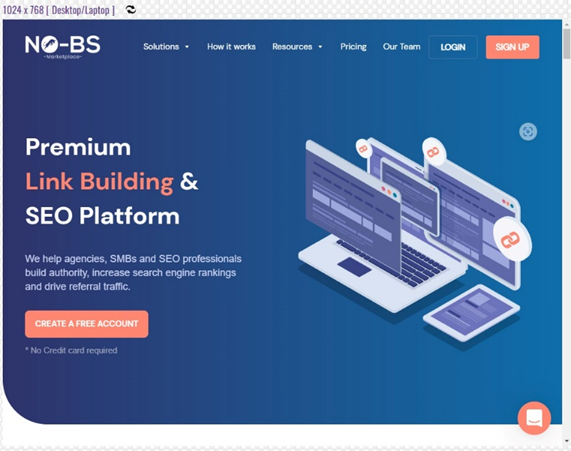 You may notice that the vector art from the desktop site disappears in the mobile site, as it isn’t needed and only takes up precious screen space. The menu bar on top has also consolidated into the hamburger-style collapsible menu on mobile. These changes make mobile browsing highly convenient for visitors.

As advanced as Google’s algorithm is, it still has limitations. For instance, it can’t discern the content that needs to rank high among multiple duplicates. As a result, it may either rank the wrong page or decide not to rank any of them. Believe it or not, it often happens to websites maintaining print versions of their articles or online forms.

Fortunately, checking a site for duplicate content doesn’t have to feel like finding a needle in a haystack. Tools like Duplicate Content Checker from SEOreviewtools lets you narrow down the results. For example, here’s the result for Search Engine Land. 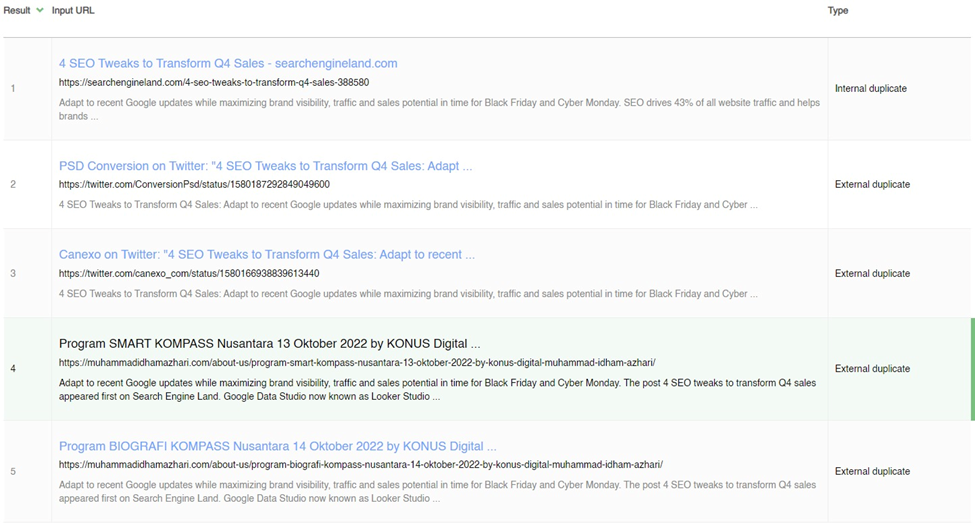 In this situation, the rel=canonical tag is your best friend. By adding this single line to the code, you can tell Google what page to ‘canonicalise’ or rank on SERPs. It’ll retrieve all the link juice sent to the duplicates and channel them to the one page referred to in the tag.

The box on the right is an example of a GBP. It’s a service that greatly helps businesses rank in SERPs, particularly in local search. People will search for a product or service close to them, so they tend to enter geotagged queries like ‘Chinese restaurant Melbourne.’ 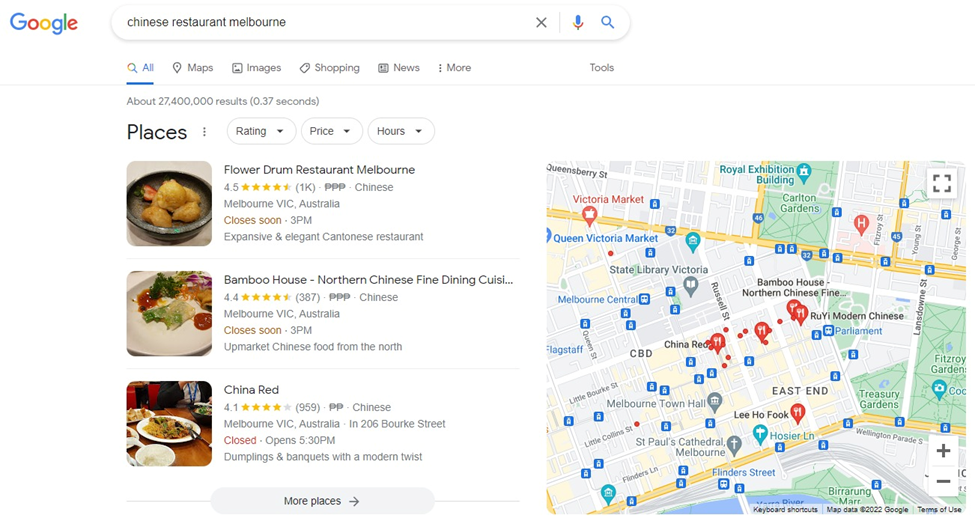 Sometimes, the queries don’t necessarily have to include a specific location. Users can type in ‘Chinese restaurant near me’ or to that effect. 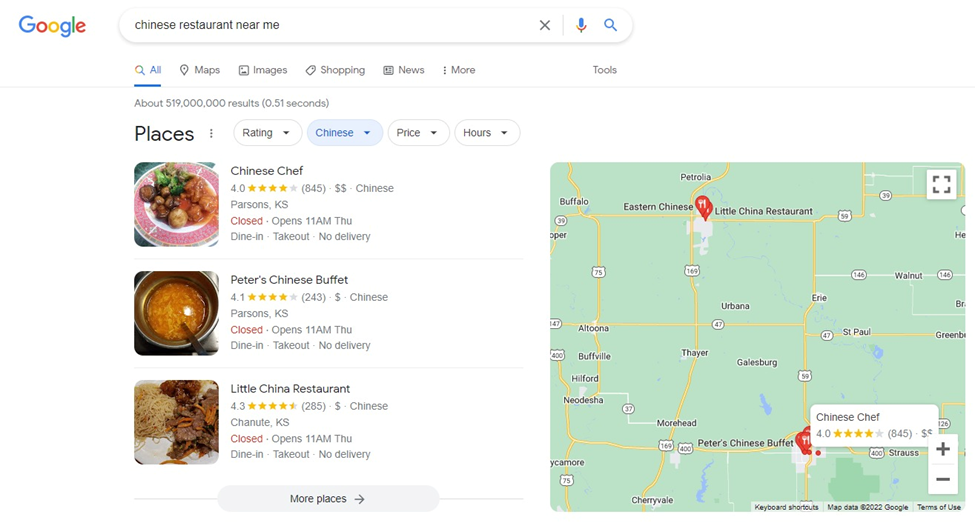 You’d be surprised at how effective local SEO can be, even if it targets a significantly smaller customer base than national SEO. ‘Near me’ queries have seen dramatic increases over the past decade, even inspiring some businesses to use it as part of their names. Google has since fixed this, prioritising local search results instead of business names with the phrase.

It also pays to pick your battles, and ranking in national or global search is super hard. Stores have a better chance of ranking in SERPs for ‘store near me’ or ‘store in (insert location here)’ than just ‘store.’ GBPs can be effective force multipliers in dominating local search.

These reasons for not ranking on Google aren’t all there is. Then again, working on these aspects is a good start. Amid the fierce jostling for dominance in SERPs, aim for at least the top five, if not first place. Above all else, don’t test Google’s patience by resorting to black-hat measures.

If you can get a professional to help, that’s even better. Visit here to learn how we can be of help.